For the 80th anniversary of Hanyang University, Les Françaises Consulting participated as an international partner in the 2019 Global Accelerators Conference – Startup Pitch, from May 30th to 31st.

Hanyang University was founded in 1939 as an Institute of Technology. It was created thanks to the strong conviction of its founder, Kim Lyun-Joon. He rightly believed that education would be one way of rebuilding Korea after the Japanese occupation and preparing for the country’s future. Upon the country’s liberation in 1945, the institute became the first university of technology and settled in Wangsimni, Seoul, and then in 1953 in Haengdang-dong, Seoul. Hanyang is constantly trying to evolve to meet the demands of the 21st century.

Hanyang University actively supports and supports Korean start-ups in the implementation of their projects, especially internationally. During the conference, 11 foreign partners were invited to share their experiences to Korean students and entrepreneurs. Honored to have been invited to such an event, Les Françaises Consulting would like to share some details of two interesting days and enriching encounters!

Les Françaises Consulting met with Korean start-ups during individual mentoring sessions to advise them about the implementation of their export project. The diversity of the start-ups and the concepts proposed illustrate once again the richness of the Korean entrepreneurial ecosystem. Koreans are innovative and they let us know!

At the conference that followed, Cristina, CEO of Les Françaises Consulting, shared, alongside other foreign partners from Europe and North America, the current trends and challenges of international markets. The proper preparation of projects remains key before launching them on a new market!

The foreign partners present at the conference signed a Memorandum of Understanding (MOU) with the University of Hanyang. Les Françaises Consulting hope this will be the beginning of a long and fruitful collaboration for the development of Korean start-ups abroad.

The Centre for Creative Economy and Innovation (CCEI) in Seoul is another space dedicated to start-ups in Seoul. During their visit on May 31st, Les Françaises Consulting participated in a roundtable with representatives of South Korean organizations such as the Korea International Trade Association (KITA), highlighting the support they could provide to Korean start-ups. An export project to Europe can only be achieved after being carefully thought out and fully integrated. By accompanying entrepreneurs wishing to export their services and products to France and Europe, Les Françaises Consulting help them to better know these markets and prepare their export project.

Les Françaises Consulting visited the Seoul Business Agency (SBA) premises. The South Korean government, through partnerships and structures and incubators such as SBA, is proving its active support to start-ups for the entry into foreign markets overseas!

MOU’s were signed as well with CCEI and SBA.

For more information, see the article on this event on the Hanyang University website. 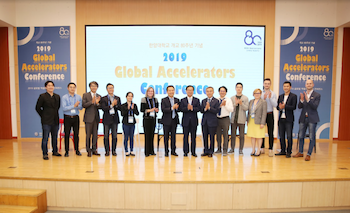