It’s impossible to talk about Korean culture and traditions without dwelling on one of the most important festivals of the year: Chuseok.

This holiday is celebrated on the 15th day of the 8th lunar month, the day when the full moon is supposed to be the largest and most visible. Thus, this event takes place every year in September or October according to the lunar calendar and all Koreans take for the occasion an extended weekend or even a holiday.

In general, Koreans return to their respective families, creating a real exodus where everyone returns to their hometowns.

The traffic jams are impressive, most leaving the Seoul metropolis to go to the provinces.  Public transport to travel in the country is full, booked months in advance. Some, on the other hand, choose to go abroad, making Chuseok a busy tourist season.

It should be noted that this celebration is not religious and is observed by the entire population regardless of their denomination. Chuseok’s history is linked to the country’s agricultural heritage. This is why Chuseok is named harvest or harvest festival and has been celebrated for over a century since Joseon dynasty. Even today, several rituals will be recreated by each Korean household.

What are the Koreans doing at this party?

The Charye is one of the commemorative rites that Koreans perform. Performed in the morning, Charye’s ceremony consists of placing various tribute foods in an arrangement on a table before making a prayer. In general, rice is placed at the north end of the table, fruits and vegetables at the southern end, meat at the west end and rice-based cakes and drinks at the east end. The Charye rite pays tribute to the last four generations and calls for the protection of their spirit for the future. Once completed, relatives can visit the missing by going to their graves to clean it up. This practice is considered a duty, it is called Seongmyo.

During the festivities, food plays an important role. Families must prepare rice cakes called Songpyeon and dishes from the Charye. Songpyeon is a sweet rice cake that can be enjoyed as a snack or dessert. It is made from rice powder made from rice powder stuffed with sesame seeds, red beans, chestnuts and other stuffings that vary from region to region. The songpyeon is steamed and covered with pine needles for a fresh scent. During the Chuseok period, South Koreans also drink rice alcohol with friends and family.

Koreans play a variety of folk games and entertainment. The two most famous dances on this occasion are talchum and ganggangsullae. Talchum is a Korean mask dance, while ganggangsullae is a dance circle. During the circle dance, the women are dressed in traditional clothes called hanboks. 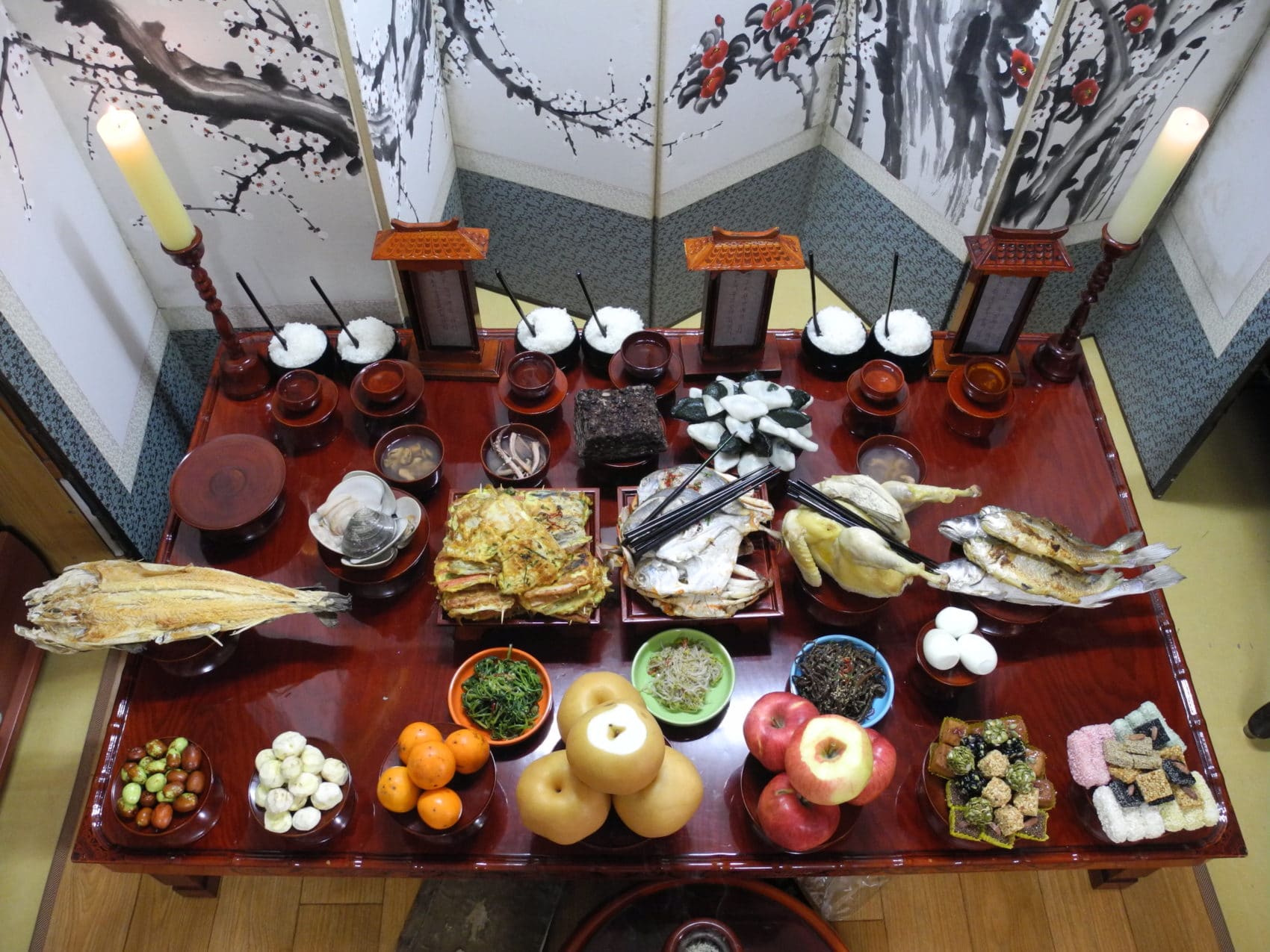 Chuseok is also celebrated in Seoul!

Chuseok in Seoul is also a special moment because the capital is emptying dramatically. Nevertheless, the families who stay in Seoul to celebrate are not left out: the majority of national monuments remain open to the public and admission is free for the occasion. The palaces are filled with Koreans who have come to celebrate the arrival of the fall, some of whom wear the famous hanbok.

Finally, it should be noted that the majority of shops and restaurants are closed. However, there are still many activities, tours and walks to do and it is an opportunity for tourists and expatriates to soak up the family atmosphere that prevails then in Seoul, which is not found the rest of the year.

☞ Touristic sites to visit in Seoul during Chuseok